I never thought I would have to wear a flak jacket

Posted on September 12, 2010 by Rebecca Parsons

Updated to add a picture and fix the spelling of Karamojong. 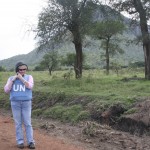 The morning of 6 September we left on the flak jacket journey.  Actually, we donned both bulletproof vests and helmets about an hour or so outside of Moroto, so at least most of the journey was armor free.  As a relatively short-waisted person with long legs, I spent much of the time in the car feeling like a turtle, since the bulletproof vest was longer than my torso.  Between that and the helmet sliding down, I am sure I made quite a vision of metallic glory.  Our driver estimated that each vest weighed about 30 kilos (approximately 66 pounds).  I am not sure it was quite that heavy, but it wasn’t far from it.

The reason for the armor, and the armed escort vehicle, is the presence of cattle raiders in this region.  The Karamojong consider themselves an independent kingdom, and thus feel they should not be considered part of Uganda.  They raid cattle in the Acholi region of Uganda, in Kenya, and yet they also raid across groups of Karamojong.  The raiders are very well armed, and they do get in firefights.  Attacks on UN vehicles aren’t expected; the risk is getting caught in the crossfire.  I must admit I felt quite silly sitting in the big UN vehicle, wearing a bulletproof vest and a helmet, while the locals strolled down the street.  We did see one cattle herder with two soldiers escorting him, but the vast majority of the locals just went about their business.  Apparently, this means that the soldiers helped this herder recover his raided cattle, as the soldiers escort the herder back to his village in that case.

Moroto is the major city in the northern sub-region of Karamoja.  Karamoja itself is composed of several districts, of which we will be visiting at three – Moroto district, Kotido, and Abim. The drive from Kampala was about nine hours, including a 30-minute stop for lunch in Soroti, which also seems like a fairly good-sized town.  I had an avocado salad for lunch.  I had no idea how prevalent avocado was here.  I think I’ve had more avocados since arriving in Uganda than I have the rest of the year.  It’s helpful that they have to be peeled, making it a safe food substance.

We stayed at a compound called C&D, which is run by an Italian NGO.  The good news is that this meant we got real coffee for breakfast, not Nescafe, which is an abomination if I must say so myself.  We also ate very well for dinner, albeit with a bit more pasta than I am accustomed to.  The ice cold showers due to the lack of hot water we’ll just not discuss anymore.

The area itself reminds me strongly of Santa Fe, New Mexico, with the city nestled in the mountains, the terrain, and in particular the light.  Sunset and dusk are gorgeous times in this area.  Apparently the local staff members at the UNICEF office here climb the mountain.  We in fact had a closing celebration of “sundowners” about 7 minutes or so up the mountain to a nice plateau overlooking Moroto and the valley.  We could barely see Kenya from there.  The sunset was spectacular.  I am hopeful some of the pictures turned out.

The drive up was made more interesting with the two sets of trucks that were stuck in the mud.  Apparently, there’s been a lot of rain in this area recently.  Indeed, the region is coming off of approximately four years of drought. We had the benefit of four-wheel drive, so we just went around the problem, fortunately. The road itself was quite rough; I’d estimate about 6 or more hours were over rutted roads.

We saw quite a large variety of livestock along the way, including donkey, goat, cattle, chickens, and even camel, although this was rare.  This trip we will be focusing on youth centers more so than teacher colleges and schools.  We also will try to see some NGOs that deal in the agricultural sector, since this region relies so heavily on cattle and the effects of the cattle raiding are so devastating to many aspects of life in Karamoja.

Other posts from this visit will include a discussion of the economics of cattle raiding, an exploration of life in a village, and why folks might care less about cholera and other diseases than we’d like them to.  At least those are the topics I can think of at the moment. Thanks for all your comments.

This entry was posted in Sabbatical Experience Reports. Bookmark the permalink.