Teaser On My Trip to Bwindi to Trek With Mountain Gorillas

I’ve had so many pings for pictures, I thought I would get a few of the pictures out first and then add the more comprehensive blog posts later this weekend.

I Didn’t Want to Violate the No Closer Than 7m Rule — They Came To Me! 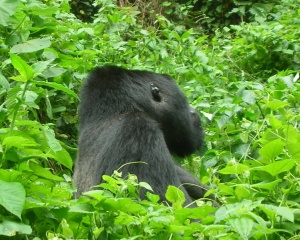 They have a “no closer than 7 meters” rule, but they also have a “don’t move if they approach you, unless the Ranger says to” rule.  I chose to obey the latter.  So I stayed and they approached.  You can only see one in this picture; I am hoping others got a better shot (this was taken by the Ranger with my camera).  Estimate from the scene was 7-8 feet away from the closer one, and the second one was about 5-6 feet away from the first. 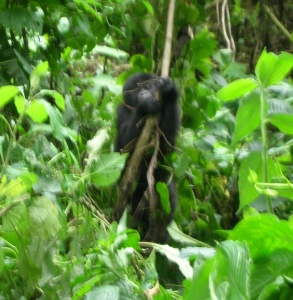 I’m not sure I can get down from here

This is one of the two silver backs we saw.  He’s checking out the surroundings.  I’m sure he knows we’re there, but he spent a fair amount of time with his back turned to us.  We finally moved around to see his face and he took off. He seemed to me to be sitting there on guard duty, but it is far too easy to ascribe human motives and emotions to them.

This is one of the youngsters, although it is hard to get a sense of size.  Consider, however, the diameter of the tree.  We saw many instances of the gorillas going up trees that were just not quite big enough, resulting in a downed tree.  I think this might be like elephants knocking down trees to get to the nice tender leaves at the top. The also seemed to enjoy riding the tree down; I didn’t get a picture of that.  One rode the tree down and tumbled a bit further down the hill All this viewing took place on the side of the mountain, making footing an interesting problem.

For those impatient sorts, http://www.friendagorilla.org/Family_bio.aspx?fid=30 contains information about the family of gorillas I spent time with.  Some more stats: 2.5 hours to reach the gorillas from the briefing, consisting of in excess of 600 meter vertical climb (yes, that’s over 1960ft vertical).  Yes, I was tired at the end.  One hour and a bit with the gorillas.  About 1 hour back down to the briefing banda.  We beat the rain, and we only were attacked by ants twice. The Ranger Godfrey and one of our party were charged by gorillas in our family, but nothing serious. Godfrey had his leg grabbed and the video Jeff was taking when the gorilla got tired of being the lead actor is very amusing.  There were seven people total in our group, four others with me and another couple.  We had one Ranger, two porters (Thank You, Ezra the Porter!), two trackers (who started at 6am to find the family for us, Thanks to you as well!) and our guard, complete with AK47.  We saw no elephants but saw a couple of fresh elephant tracks, and a fair amount of fresh elephant dung.

Stay tuned for the full story!

This entry was posted in Sabbatical Experience Reports. Bookmark the permalink.